I had seen the trailer of Gran Torino a while back and remembered thinking “Oscar Movie. Pass.”. But then my brother went to see it and said it would be a film our entire family would enjoy. I didn’t really believe him, but it seemed like the right movie to see when my parents were in town. 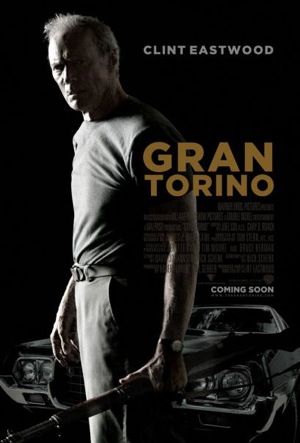 Gran Torino stars Clint Eastwood as Walt Kowalski, a Korean War vet who has just lost his wife. He’s grumpy, tough, and can’t get along with his kids or his neighbours. All he cares about is his dog, Daisy, and his prized car, a 1972 Gran Torino. When his teenage Hmong neighbours, Thao and Sue, get into trouble with the local gang, Walt steps in to help them out. Before he knows it, that gets Walt deeper embroiled into the life of his neighbours.

‘Everybody’s a little bit racist sometimes, Doesn’t mean we’re all out committing hate crimes’ (from one of the songs of Avenue Q, but more about that in a later post). Gran Torino’s main character  Walt seems to fit that bill exactly; his remarks about his neighbours are cringeworthy at times, but you know that he doesn’t really mean it. I don’t think anybody but Clint Eastwood could have pulled that character off; Walt is tough and scary, not two attributes you’d associate with a 78-year old. Eastwood delivers lines that could have turned out silly, but hearing him say them you know he means it. Even that old, Eastwood is still believable as a tough no-nonsense guy. 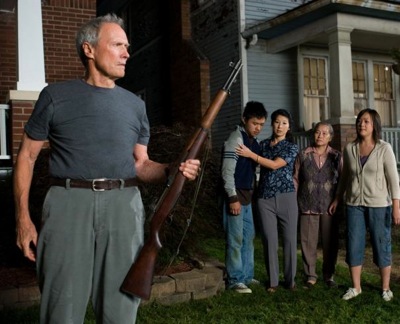 The story takes a bit slow to unravel, but halfway through it speeds up. Don’t come into this movie expecting a lot of action; it isn’t an action movie. There are a couple of “action”-y scenes (Clint being tough), but nothing too spectacular. Gran Torino also isn’t really a drama; most of the movie is pretty upbeat and I found myself laughing during a couple of scenes.

Gran Torino is an interesting movie, and I’m surprised it wasn’t nominated for more Oscars this year. Having seen most of the contenders, I truly think Gran Torino was better than most of those and Clint Eastwood deserved at least to be nominated for Best Actor.