I should have blogged about this two weeks ago when it came out, but I was in the Netherlands then and since I’ve been back it just slipped my mind completely. Maybe you’ve seen it already, but if you haven’t it’s a lot of fun (especially if you’re into movies). Empire has created this wicked Cryptic Canvas, a painting that contains references to 50 movies.

My brother showed the game to me, challenging me to find as many movies as I could. He and a friend of his had solved all the clues, so of course I had to try and do that too. Some of them are pretty easy to figure out. Just mentioning the object alone already gives you the answer. Some are slightly trickier; it helps saying out loud what you see. And some are just plain evil. 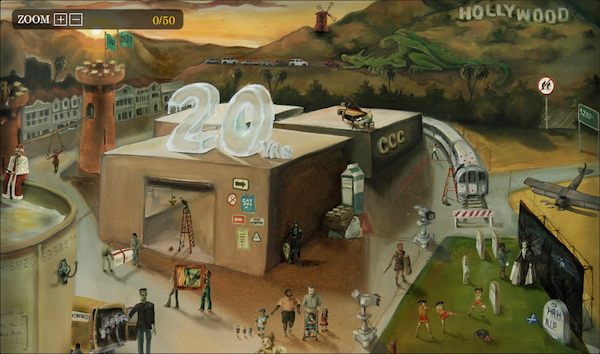 I think I got to about 30 when I started struggling, so my brother started giving little tips. Not so much tips as in clues about the movies, but more where in the canvas you had to look and what belongs together. For instance, the bird and the flower in the top right corner? Two separate movies. The family with kids (in front of the huge baby)? Also two separate movies (the three mini kids are 1 movie, the rest another). And did you see there are four movies in the bottom right hand corner?

I really struggled with a couple of the obvious ones, especially “CCC”; I am truly kicking myself over that one (also because in the end I didn’t figure that one out, my mum did). There are a couple that I love though: the gravestone with the little flag, the two musical instruments, the towers with the hanging guy, and the guy near the train.

In the end I had to give up at 45, the final 5 I just couldn’t figure out (the family with kids, the flower in the top right, the man on the red line, the fighting cheerleaders, and the book destroyer). Looking at those though, I should have at least figured two of them out; one I hadn’t heard of and the other two were just a bit too difficult.

So how many movie references can you figure out?