Virtuality aired last Friday in the US, but I still haven’t had the chance to see it. The reviews of critics are pretty positive, but the ratings that day show that it didn’t attract that many viewers (well, what did you expect Fox? It’s on a Friday evening death slot). A part of me is still a teensy bit optimistic that it might be picked up for a full season, but chances are it will die a miserable summer death.

Last week I missed out on a conference call with Sienna Guillory and Clea Duvall, but I did manage to get a transcript of everything that was covered. Here are a couple of the questions/answers I found interesting:

Q: I was just wondering if you guys could just talk, go into a bit of detail about your characters, specifically who they are and what they do and what it is about them which you both liked.

Clea Duvall: I play Sue Parsons, who is the ship’s pilot. She definitely has sort of like a cocky, hotshot attitude, which was pretty fun to play.

Sienna Guillory: My character is Rika. She’s an exo-biologist. She’s introvert, oversexed, and I just think quite real. I mean, the fact that we’re geeks doesn’t necessarily mean that we’re particularly brilliant at handling our emotions. So I think we’re all prone to exploding emotionally, and I thought that our advanced kind of cerebral ability didn’t necessarily lend itself to us emotionally, and I think that that’s what’s nice about the story. There are huge big ideas, but we’re all very accessible people that are easily bruised.

Q: What else attracted you both to the project overall, in general, Ron Moore’s idea?

Sienna Guillory: The fact that it was an ensemble. I was seduced by the idea of working in an ensemble, and the complete lack of limitation plot-wise, because anything can happen. Every single character has their own movie. And in virtual reality, your wildest dreams and fantasies can come true, so we all—it’s the fact that it’s limitless and entirely inspirational.

Clea Duvall: I had the opportunity to work with Ron Moore several years ago on a television show called Carnivale, and just fell in love with him and absolutely was excited at the thought of working with him again.

Q: Clea, I had a quick question for you, because we’ve seen you in so many different genre projects and doing so many different types of characters. What kind of preparation do you do to get into what you’re doing, and how do you approach each one of these different types of characters you always seem to play and always seem to be able to put together and somehow knock it out of the park?

Clea Duvall :That’s very sweet of you to say, thank you. I approach each thing differently. On Virtuality, for me it was so much about getting to know the people that I was working with and getting comfortable with improv, which is something that I’ve never done before, but Peter Berg likes to work that way, just sort of letting scenes run and seeing what happens. So it was a lot of kind of on-the-job training on this one. Any preparation I did had to be sort of thrown out the window and just putting the trust into my fellow actors and my director. 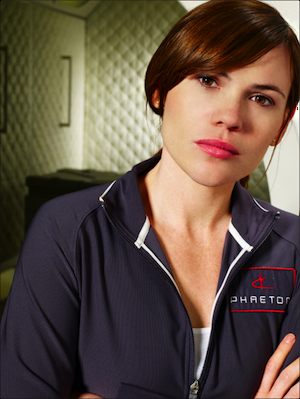 Q: Sienna, just one quick follow-up with you: I know that a lot of the work that you guys did, especially when you were in your virtual environments, was a lot of green-screen-type work, backdrops and everything. Were you just kind of in a room filled with green screens? I mean, what were some of the challenges in trying to still make all of that work together to where it all kind of blended together, and was that a little bit more difficult not having objects around you?

Sienna Guillory: I think in a way, when you’re working with green screens, it’s hugely enabling. It’s the same thing – the whole thing that Ron Moore came up with. In Virtuality, he gives us a life with no limitations, so you have to use that green screen as a plus. The fact that there’s nothing there to limit your imagination or to limit where you see yourself or how you see the scene unfolding can be a helpful thing, so you just imagine it exactly the way you want it to be, rather than kind of being held back by the physical limitations of a set.

Q: I wanted to ask both of you, there seems to be a different acting style. You mentioned the improvs, but beyond that, particularly when you’re talking directly to the camera, you guys seem to be very much so of improvising, plus there’s this kind of real intimacy to it. Tell us what those – does it feel different to do those kinds of scenes? Do they provide something different?

Sienna Guillory: I would say – to me, it was part of my character. I decided that she hated having her privacy invaded, but at the same time she was desperate for adventure. She’s kind of complex, an introvert and oversexed. But for me, those moments of intimacy were vital because there are so many big ideas at play within the script and the story. It’s absolutely vital that we’re all regular people, telling human stories.

Q: And the same thing with you, Clea: When you talk in there, you just – it’s a different way than the kind of acting somewhere else, when you’re acting and semi-improvising to a camera like that, as if you’re a character talking to a camera. How does it feel different when you do those?

Clea Duvall: I didn’t really do much of it, but what I did do was – it sort of felt to me almost like you’re writing in a journal, just that stream of consciousness, just really tapping into your character. I really wanted to do more of it, and hopefully if the show is a success, I will get to do more.

Q: I understand that each of the crew on the ship has his or her own virtual reality. So my first question is what was each of yours?

Clea Duvall: My character was very much into outdoor sports – bike-riding and surfing.

Sienna Guillory: My character is actually an exo-biologist, which is kind of extreme gardening on a molecular level. But I’m trapped in this passionless marriage to the ship’s psychologist, so I use my virt module to fantasize about sex and intimacy. 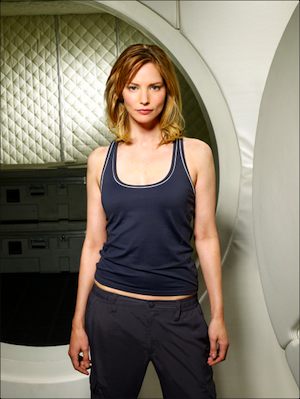 Q: My follow-up is that, given that our world seems to be increasingly moving towards one that’s dominated by virtual reality, how do you think that will impact our emotional and psychological well-being as it’s reflected in your characters in the show?

Sienna Guillory: In terms of how it worked in the show, we’re geeks, but we’re still people, we’re still humans. So anything that happens to us in our own personal movies happens to all of us, because we’re stuck together. And the whole point of it is Ron Moore is providing us with a life with no limitations, so I think it’s tremendously healthy to be able to explore your inner cravings and all the things that you dream of and be able to realize your fantasies without necessarily hurting other people. But also, I think you need to realize that when you do experience something emotionally it does affect who you are, and I think that’s the backbone of what we’re doing, and what happens in our virt modules affects everybody else, even though we think it’s private.

Q: You touched upon the virtual realities that your characters would spend time in. If you were required to kill time with virtual reality, what environment or scenario would each of you be most curious to play with? If the world was your oyster, the virtual world.

Clea Duvall: I think that I would probably want to go into space. It’s the thing that is so far from my reality, and it’s something that I’ve always been so intrigued by but will probably never in my lifetime have the ability to experience it, so probably that.

Sienna Guillory: I think the places that you want to be and the things that you want to be doing change from day to day, minute to minute. I think if I refer back to where we were when we were filming – I mean, working with Pete Berg, he’s phenomenal. He’s the only director who’s never held me back. He just lets us go and raise the bar, and he’s kind of just this absolute alpha male.

Q: I guess, given that the story was meant as an ongoing story, were there any details that you guys were given or that you asked for going forward about the characters?

Clea Duvall: There were little bits and pieces that we were given because I think we all had the hopes that it would continue. But they, Michael and Ron, didn’t really give away much. I think that we were all under such pressure to just do what we were doing, that thinking into the future was overwhelming at times. ut there’s definitely a lot more to the story that, fingers crossed, we may be able to tell.

Sienna Guillory: We had great times when everybody would get round Erik Jensen and Ritchie Coster and all of us would have these kinds of mad ideas about, maybe we’re not actually on a ship. Maybe we’re like all in these little pods being fed these ideas, and we’re going to wake up and we’re not actually – or maybe we’re like asleep and the whole thing is a virtual simulation. So there’s a lot of speculation –

Clea Duvall: Or it’s a time-travel.

Sienna Guillory: but – yes, none of us really knows anything.