This review has two parts. First my normal review without any spoilers. Then, after a warning, my thoughts about this movie with spoilers.

I remember seeing the trailer for Passengers a long time ago, and thinking “huh, Anne Hathaway in a creepy thriller. Seems interesting.” And then I never heard anything about it.

Passengers is about Claire Summers (Anne Hathaway), a grief counselor working with the five sole survivors of a plane crash. Despite her better judgment, she develops a relationship with Eric (Patrick Wilson), the most mysterious of the survivors. But then, one by one, the survivors begin to disappear mysteriously, and Claire uncovers what might be a conspiracy…

There’s a reason I didn’t hear anything about this movie. The first two-thirds of the movie are boooring. The underlying plot is kind of intriguing, but everything else about the first hour is just bad. Everything unfolds way too slow, and there’s never any real tension or suspense. For a movie that’s being marketed as a thriller, Passengers doesn’t thrill at all. You never have the feeling that Claire is actually concerned that her patients are disappearing; she’s off fooling around with one of them. The threat of why they’re vanishing never feels real, and the conspiracy angle seems cliched.

But then that last half an hour happens (it could also be only the last quarter of an hour; I didn’t keep track when the ‘interesting’ part started). It’s not enough to save the movie, but I was semi-pleasantly surprised by it.

Another problem with this movie is the marketing. I’ve put the poster after the spoiler warning, cause anybody with a brain could figure it out just by seeing that poster. The DVD cover and tagline is even worse; don’t they want people to watch their movies?

If you catch this movie on TV, I’d say give it a go. You might turn it off halfway though, cause there’s not a lot going for it. If you’re able to watch beyond that (kudos to you!), I’m curious to hear what you thought about it. Don’t get this on DVD; it’s completely not worth it. 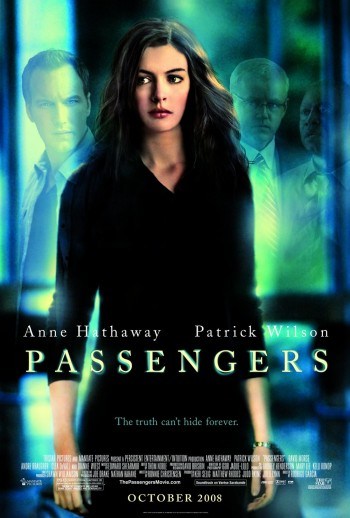 So if you’ve come this far, you’ve already seen the movie or you want to be spoilt. The big twist of the movie is that Claire is actually one of the passengers from the plane crash and that she’s dead and in some kind of in-between limbo world. Everybody she comes across in the movie is dead; either they’re one of the other plane crashees or they are ‘sent’ to help them deal with death.

The idea is pretty cool, even though it’s just a rehash of The Sixth Sense. And it could have worked, if it had been one of those ‘figure it out’ movies. But there just wasn’t enough clues in the first part of Passengers for this. The twist comes completely unexpected (although I wasn’t paying as much attention as I should have; because it was so boring, so I was reading blog posts at the same time) and then it goes all gooey “we’re dead, but we’re in love”. Add to that a tedious first part, and I wonder how many people were actually able to watch the entire movie without turning it off halfway.

By the way: I hadn’t seen that poster before the movie. I’m wondering if I would have been able to guess the twist, cause it seems pretty obvious with that poster!