Gillengaria seethes with unrest. In the south, hostility toward magic and its users has risen to a dangerous level, though King Baryn has ordered that such mystics are to be tolerated. The King knows there are those in the noble Twelve Houses who could use this growing dissent to overthrow him, so he dispatches the mystic Senneth to access the threat throughout the realm.

Accompanying her is a motley band of magic users and warriors including Tayse, first among the King’s Riders – who holds a hard view of mystics in general, and Senneth in particular. But as the unlikely allies venture farther into the south, they will face death in a land under the sway of a fanatical cult that would purge Gillengaria of all magic users. And they will come to realize that their only hope of survival leis in standing together…

I stumbled on one of Sharon Shinn’s stand-alone book last year (Summers at Castle Auburn) and had been meaning to try out one of her series. The Twelve Houses series is set in the world of Gillengaria, your typical fantasy kingdom with a king, knights and magic. The kingdom is split up in 12 separate parts, each ruled by a different noble house: together they form the Twelve Houses. In the book you slowly learn who the different Houses are, their leaders, their traits, and the political intrigues between them. I always love the more political side of fantasy novels, with scheming, plotting and manipulating, and here in Mystic and Rider you get just that without it being too overwhelming. 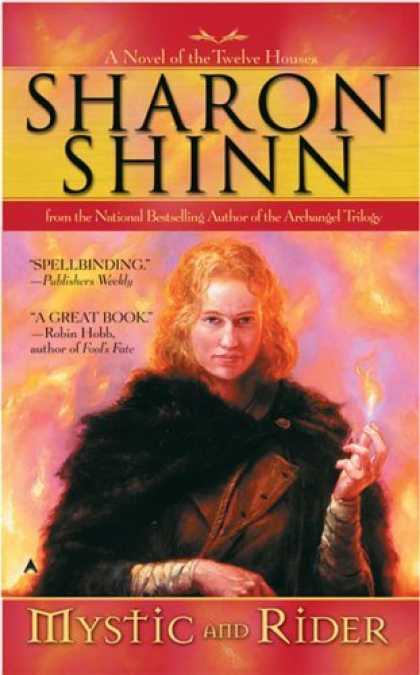 The book starts off with the group saving a young man, Cammon, who is rumoured to be a mystic, and through him, we are introduced to all the characters. The group is led by Senneth, a mysterious woman with the power of fire. She has been ordered by the King to look into the southern Houses, to figure out if they’re on the brink of a civil war. Accompanying her are two other mystics, both shapeshifters, Kirra and Donnal, and two Riders, Tayse and Justin, loyal knights of the King.

It took me some time to really get into the book, and start caring for the characters. Mainly because you don’t know anything about them besides their names and the fact that 4 of them are mystics and 2 of them are Riders. Once the characters start opening up to each other (and to the reader) you slowly learn who they are and it really becomes interesting. Senneth in particular has difficulty opening up to people, but you slowly discover her background and the reasons to why she’s there.

Some might pick up this book thinking its a romance, but it’s not. There’s a faint romantic thread in it, but the main focus is the mystery of the southern Houses. I really enjoyed the book, and I’m definitely going to pick up the next ones (although not until I’ve worked through my 50+ ToRead list, eek!).

Mystic and Rider is the first book in The Twelve House series by Sharon Shinn – £4.85 on Amazon.co.uk, $7.99 on Amazon.com