Again I’m way behind in blogging about the events I’ve been going to. A couple of weeks ago I got to attend this year’s Playful, a one day conference with a great collection of speakers from different fields, all talking about game design. There were 16 talks in total, each 20-30 minutes long. I don’t have time (or the memory, to be honest) to tell you about all of them, but I’ll try to remember the highlights for me: Because of transport fail, I sadly missed the beginning of this talk, but Roo talked about the relationship between movies and video games. He gave examples of games of movies and movies of games (like Max Payne and Super Mario Bros), and that they rarely work that well. He also showed how games themselves are difficult to illustrate properly in movies. For example, there’s a part in the Trainspotting book about how the main character thinks he’s in a video game and is a great piece when you’re reading it. But the scene in the movie? Not that much. Another example (although not a video game) is the poker playing in Casino Royale. While for the rest it’s a great movie, that poker playing is ridiculous. Roo ended the talk with giving the one example of a movie/game which is the exception to the rule, where the movie and game go both ways and work perfectly on both levels: Tron.

I should have been paying more attention to this talk, but I was busy replying to an important email (I know, lame excuse, but this was the type of email I couldn’t leave until later). Anyway, I missed most of what he said (anybody have a complete description somewhere?), but he ended with talking about a GPS puzzle box. The idea was basically geocaching in reverse: a box with a small lcd screen on it, that showed you how far you are from the goal location and you can only open the box on that specific goal location. The person who made it gave it as a wedding gift; the newlywed couple had to find the secret special location where they finally could open the box. 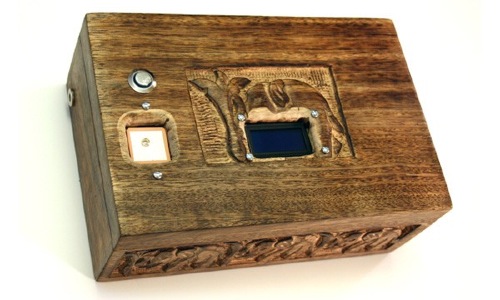 This talk was the highlight of the day for me, which is also why the description is a bit longer than the others. James talked about the idea of the miraculous, which pretty much leads to the idea of awesomeness. For him, when he thinks about things that are awesome (and miraculous) it all kept going back to scale and complexity. Quotes from Douglas Adams and Thomas Pynchon are great in showing how metaphors are used to illustrate the ideas of scale and complexity. He also showed how you have complexity in complexity, scale within scale: Zak Smith created a book of illustrations based on Thomas Pynchon’s novel Gravity’s Rainbow. For every page in the 760 page book, he made an illustration, creating a complete new work based on the former. Another example was Tom Phillip’s books The Humument, where he painted over the pages of an old Victorian novel, creating a new narrative with new characters.

The same can be done with technology: with scale and complexity you can make strange mechanical objects and machines. For example, Heath Robinson’s contraptions of weird complex machines aimed in doing simple things. Another example was the predecessor of the Collusus (the machine that broke the Enigma code) which initially didn’t work, but they ‘changed the frequency’ and it did. Or Babbage’s difference engine machine, which surprisingly works even though it only was finished decades after the design was initially made on paper.

The best part of the talk though was a machine called MENACE: the Matchbox Educable Noughts And Crosses Engine. It’s a ‘machine’ that plays noughts and crosses, built from 304 matchboxes. Each matchbox represents one of the 304 board layouts the opening player might face (excluding rotations etc) and contains glass beads representing the possible moves. During a turn, you pick the matchbox representing the state you’re in and randomly select a glass bead which shows you which move to make. The cool thing is though that MENACE can learn: every time you win a game you a glass bead to each of the matchboxes you used, corresponding to the moves you made (and vice versa when you lose). The more often you played the better MENACE became in knowing which moves to make. James found many simulation programmes for MENACE, but no reports of an actual machine: so he built one himself. 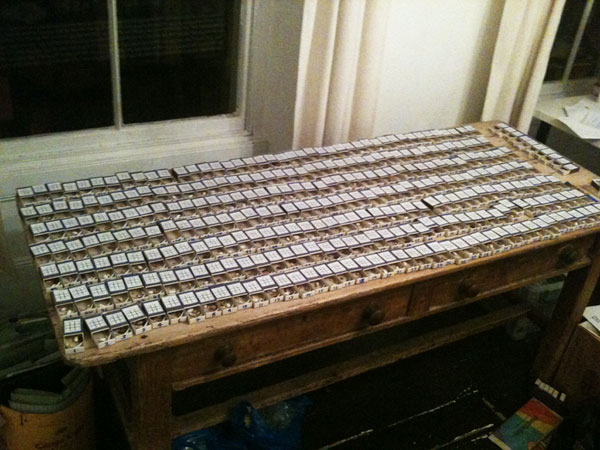 But how about scaling it up? Like for Go? So James started thinking about MAGE: the MAtchbox Go Engine. He did some calculations… and MAGE would need 3.4 x 10^15 matchboxes, each needing to hold 3610 beads. If each bead is 5mm, a match box would have to be 18m^3, which results in a final volume of 6.1 x 10^16. That’s larger than the Crab Nebula. Awesome.

It’s these type of games, the ones that rely a lot on pretending, that Russell is most interested in. “These aren’t games, like the industry thinks of games, these are something a little less, these are Barely Games.” He gave all sorts of examples on how pretending is an everyday thing. His entire presentation is online, so if you’re interested in hearing more, just head on over there.

Chris O’Shea’s talk was basically a showcase of all the cool projects he has worked on. Out of Bounds: an interactive museum installation that lets you “see” through walls as if you had x-ray vision (using an infrared torch and laser tracker). Air Guitar Championship: an interactive installation at Glastonbury, where festival go-ers could play air guitar. Flap To Freedom: a race between two people, each ‘controlling’ their own robot chicken by flapping your arms as fast as you can. Audience: an installation consisting of around 64 head-size mirror objects, with each object interacting with the visitors moving its head in a particular way to give it different characteristics of human behaviour. Some chat amongst themselves, some shy away and others confidently move to grab your attention. Beacon: similar to the Audience project, but with light beacons. The lights ‘interact’ with visitors, tracking their movements and reacting on them. Hand From Above: outdoor screens from the BBC, in which they added a giant hand of god into the real time video from people near the screens. People could see themselves on the screen being tickled, squashed, picked up and taken away by the giant hand.

There were loads more interesting talks, but these were the ones that really stood out to me (and that I still vividly remember after a couple of weeks). I’m guessing they’ll be doing it again next year, and if they do, I can highly recommend it!