I always like getting my hands on the newest gadgets in most cases, but when it comes to phones… I can’t really be that bothered. The problem is (and yes I know it’s a bit weird in this age) I just don’t make that many phone calls. Why? A) Most of my friends I’ll contact through other means (email, Twitter, Facebook, etc) and B) I hate phone calls. So why would I bother getting a expensive gadget whose main purpose is making calls?!? Yes, most smartphones will do a whole lot of stuff next to it too (and quite well), but still why pay so much money for something that inherently I don’t like doing?

For the past few years, my setup has been this: an iPod Touch, a mifi, and a cheap mobile phone that does what it does best: making calls. My current phone though is more than 4 years old, and it is on its last legs. So I’ve been looking around for a replacement, which will survive the next few years. If possible, it would be cool if I could use it as a wifi hotspot too (cutting out the MiFi), but this isn’t completely necessary.

So when I got contacted whether I wanted to try out a Samsung Galaxy Fit for a couple of weeks, I thought “sure, why not?” It would be great to try out an Android for the first time, and see if it suits me. 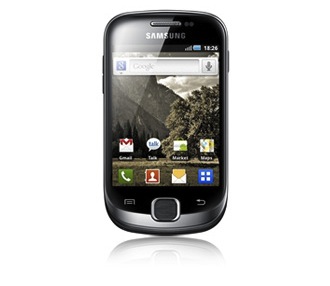 What I liked about the Galaxy Fit was how simple and sleek the design felt, yet it still felt sturdy. I even dropped it quite hard a couple of times (by accident, I swear! I’m just pretty clumsy) and it survived each time: no chips, no back panels or batteries popping off/out, no front panel major shattering. The front of the phone has a glossy metallic finish, while the back has a ribbed plastic panel. For a phone on the lower end of the price spectrum it surprisingly doesn’t feel like a cheap phone.

On the front the Galaxy Fit has one real physical button, and two touch-sensitive ones for “menu” and “back”. It comes with Android 2.2 (Froyo) installed, and to me it was sometimes a bit confusing what button did what (and when you weren’t supposed to use a button, but the touch screen).  On the left side the Galaxy Fit has two simple volume control buttons and a microSD card slot. The microSD slot felt a bit finicky, but this isn’t something I would be opening/closing on a daily basis anyway. On the top is a mini-USB port with a nice sliding door cover (much much better than the finicky microSD card slot cover). Finally, on the right is the on/off button.

Battery life was interesting. I never properly kept track of how long it lasted, but when using it as my main communication device (so also checking emails, Twitter, etc.) it would easily last the day. Using it as a wifi hotspot drastically cut that down to only a couple of hours. What I loved though was that it lasted a full week without charging when I was only using it for calls and text messages (bear in mind though, I’m a very “light” user, so it won’t last this long for everyone).

The one thing I didn’t like about the Galaxy Fit was the screen. It has a low resolution at 240×330, but quite a large display, causing the screen to look grainy and fuzzy. The first time I turned it on I wasn’t sure if it was broken or if it was meant like that. It’s meant like that. It’s not too much of a problem, especially if you’re just going to do basic stuff with it, but it is something to bear in mind if you’re thinking of getting one.