I’ve got 3 mini reviews for you today: Skyfall, Frankenweenie and Madagascar 3. All three movies should still be in cinemas at the moment; if you have to pick one, choose Skyfall! 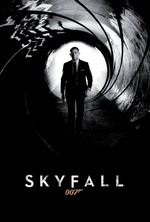 Awesome. I went to see this yesterday at the IMAX and loved (almost) every bit of it. Daniel Craig is again perfect as Bond. Javier Bardem is great as the villain, part crazy, part creepy with a touch of genius. And I loved Judi Dench and Ben Whishaw as M and Q. I think the only thing that bugged me was the London tube stations and interiors; as a Londoner I couldn’t fail to notice how wrong some of the bits were (still it was loads better than Total Recall where it was supposed to be London, but they used New York style trains and stations). Skyfall is a great movie though and I think it may be my favourite Bond movie ever. 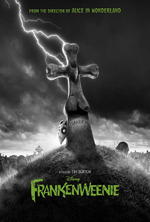 I think I would have liked this a whole lot more if I a) hadn’t seen the trailer and b) hadn’t seen the short film it was based on. It’s a sweet story about a boy and his dog, but a lot of it is predictable and those parts that weren’t were already in the trailer or in the short movie. I did love how it looked though. The black and white visuals looked a bit meh in 2D, but in 3D it becomes so much more vivid and alive. 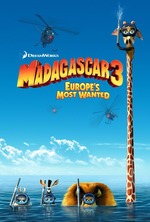 Circus Afro, Circus Afro, Polka Dot, Polka Dot, Circus Afro. I can’t get that song out of my head (I tried typing out the da da da bits, but I just got crazy counting the da’s and trying to figure out how it phonetically would make sense). I enjoyed the first Madagascar and was pleasantly surprised by its first sequel. So I was quite curious to see how well this third movie would do. This time around our 4 furry friends want to get back home to New York and join a circus in the hope of reaching their destination. The plot is a bit predictable, but it’s fun and enjoyable.