The last time I saw a movie in 3D was 4 years ago at some cheesy theme park attraction, where you got visually assaulted by biting snakes and roller-coasters. I’ve been meaning to see a “proper” 3D movie for some time now, but some of the produced stuff still looks pretty gimmicky (like Journey To The Centre Of The Earth). Coraline, however, was something I was really looking forward to and it was only on the day of the screening itself that I realized it was in 3D. Cool! 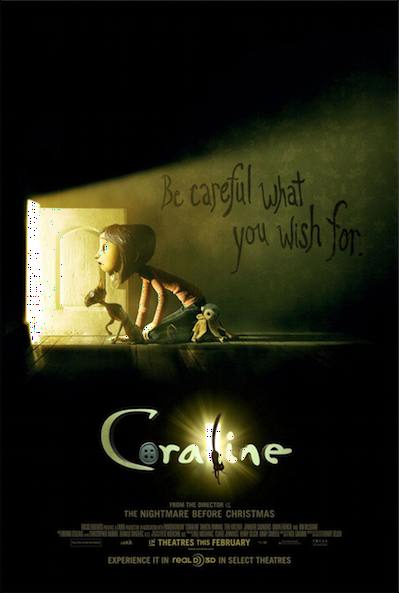 Coraline is about Coraline Jones (Dakota Fanning), an adventurous girl who moves with her parents to a new village and into a weird, creaky old house, called the Pink Palace. Both her parents (Teri Hatcher and John Hodgman) don’t have time for her and Coraline keeps herself busy by visiting the Pink Palace’s other inhabitants. Downstairs is taken by an eccentric duo of bickering old performers, Miss Spink and Miss Forcible (Jennifer Saunders and Dawn French),while upstairs is the amazing Bobinsky (Ian McShane), a Russian circus star with performing mice. But then Coraline finds a door to a parallel world, where everything is strangely idealized with doppelgangers of everbody she knows.

I’ll start things off with the 3D. So far all 3D movies (and photos) I’ve seen have all used the standard one-red-glass-one-blue-glass type of glasses (from which I always got pretty dizzy). This movie however was in RealD; you get a different type of glasses (polarized, light beige for both sides) and the projection feels way better. There were some shots in the movie that just looked amazing! And unlike what I saw from Journey to the Centre of the Earth, the 3D effects in Coraline weren’t for the sake of 3D (as in: the writers didn’t go: “ooh, let’s add a dinosaur, cause that would look so coool in 3D!”).

Coraline is directed by Henry Selick, who previously directed The Nightmare Before Christmas and James and the Giant Peach. The style looks pretty similar to those two, yet still having very much an ambience uniquely it’s own. While it looks animated, everything is stop-motion, but shot in 3D. There are quite some beautiful scenes, but my favourite’s got to be the trapeze scene; it just seems like a dream sequence (which it kind of is). 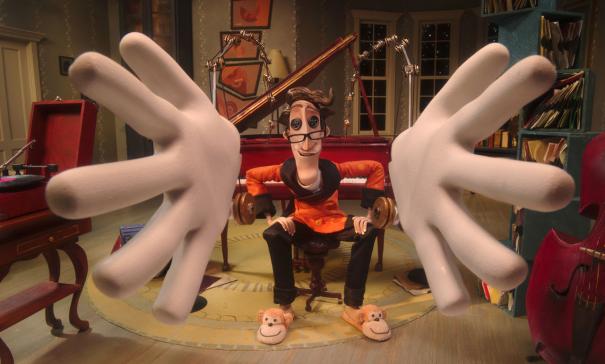 The strength of the movie mainly comes from it’s great ensemble of characters. Coraline is an interesting and likable character, and you understand the reasons behind everything she does. Her normal parents are boring and have no time for her and you can see why she’s so charmed by the attention of the Other parents. The Other parents are creepy from the start, with their button eyes and eerie perfectness. Mr Bobinsky, Miss Spink and Miss Forcible are all weird characters in the real world and their Other world versions are even stranger.

Story wise I wasn’t too impressed. I know it’s meant as a kids film, but I wish there was a bit more depth and explanation to the story. I loved the whole set-up; the weird characters, the other world and it’s inhabitants, but I would have loved to see a more satisfying wrap-up.

Coraline is a beautiful movie and definitely one you’ve got to see in the cinema in 3D. The characters are all intriguing and different than anything you’ve seen before. Tip: stay seated until after the credits, there’s a little tidbit (really tiny) after it.