I haven’t been posting much lately, mainly because I strained my arm during the holidays and sitting behind my laptop only makes it worse. This entire post is now being typed with only my left hand… freaking annoying. Anyhow I’m going to try to get posts out on a regular basis, but I also have to try and give my arm as much rest as possible.

I love slightly quirky, not that normal jewelry and this pocket watch definitely fits that description! For the math geeks among us: 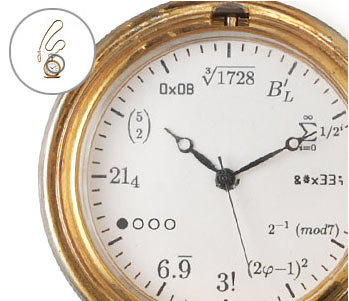 Here’s a cheat sheet for if you don’t know what all the numbers stand for:

1 – Legendre’s constant is a mathematical constant occurring in a formula conjectured by Adrien-Marie Legendre to capture the asymptotic behavior of the prime-counting function. Its value is now known to be exactly 1.
2 – A joke in the math world: An infinite number of mathematicians walk into a bar. The first one orders a beer. The second orders half a beer. The third, a quarter of a beer. The bartender says, “You’re all idiots,” and pours two beers.
3 – A unicode character XML “numeric character reference.”
4 – Modular arithmetic, also known as clock arithmetic, is a system of arithmetic for integers, where numbers “wrap around” after they reach a certain value. The modular multiplicative inverse of 2 (mod 7) is the integer /a/ such that 2*/a/ is congruent to 1 modulo 7.
5 – The Golden Mean…reworked a little.
6 – Three factorial (3*2*1=6)
7 – A repeating decimal that is proven to be exactly equal to 7 with Cauchy’s Convergence Test.
8 – Graphical representation of binary code.
9 – An example of a base-4 number, which uses the digits 0, 1, 2 and 3 to represent any real number.
10 – A Binomial Coefficient, also known as the choose function. 5 choose 2 is equal to 5! divided by (2!*(5-2)!)
11 A hexadecimal, or base-16, number.
12 – a radical

The watch is available for $85 on UncommonGoods.com.