Last year I blogged about a cool “game” that was a giant image where you had to solve cryptic clues of movie titles. Now there’s been a new chapter in the Tron viral game that does something similar but for video games.

If you haven’t been following what’s been happening with the Tron viral game, head on over to Firstshowing.com who have done some great coverage of it so far. The latest discovery of the game is the site Arcade Aid which features an image of a huge pixel city with 56 hidden video game references. Once you solve all 56 references, you can get a “Special Access” Encom ID, which will most probably lead to another step of the viral game some time in the future. 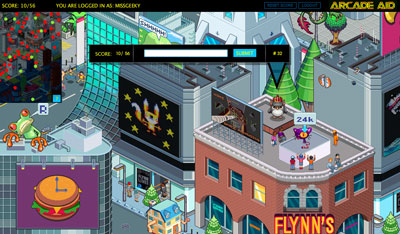 I’ve only got 10 so far (and then I decided I should blog about it first before continuing with it), but I already love some of the cryptic clues. How many were you able to solve?