Bacon! This one is for all you bacon lovers out there. After coming across a couple of bacon related products, I just knew I had to do an entire post around those. And there are some weird bacon things out there… I like bacon, but I’m not sure I like it quite this much. If you’re interested in my other Christmas Gift Guides, check out the gift guides for The Fantasy Reader and The Gamer Girl.

Show your loyalty to the Bacon Nation with this propaganda poster from etsy store Justonescarf. 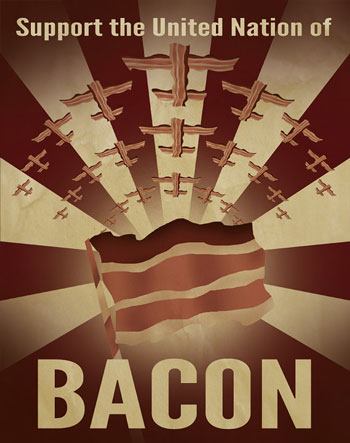 I love the description for this product: “There’s conclusive, scientific proof that bacon is an intellectual food. It’s right there in the periodic table! Barium, cobalt and nitrogen. BA CO N. Read it and weep, bacon haters. This pillow makes it very clear that you’re not one to be trifled with when it comes to the ultimate food. Show your brainpower and bacon-lust in one easy decoration!” It’s $35 at YellowBugBoutique. 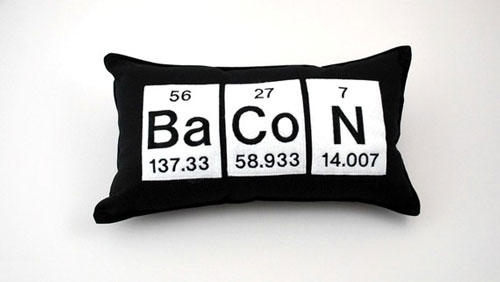 Ooh, more than 150 recipes with bacon? At first glance this looks like quite a gimmicky book, but the recipes actually look pretty decent. It’s £15.59 on Amazon. 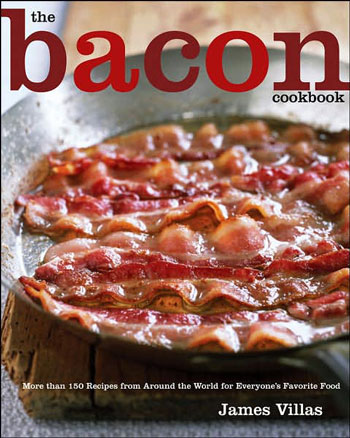 “I love the smell of bacon in the morning”. Never go without it with this candle from bubbleandgeek ($9.25). 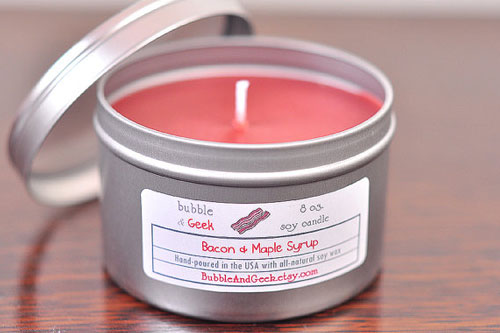 Which girl wouldn’t want to wear knee high socks like these? They’re $10 on SockDreams. 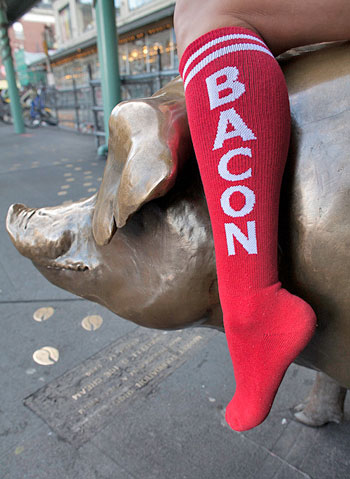 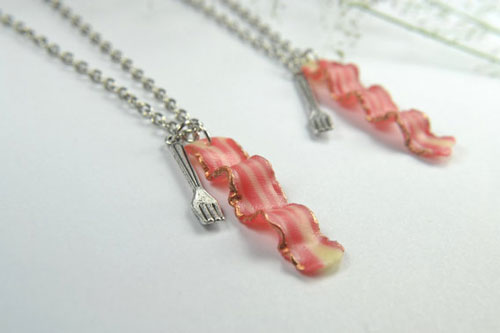 Aw, these are so adorable. I wish they were actual gummy bears though, not just soap in the shape of them. There available for only $4 at FrostedCrossbones (awesome shop name).

And even bacon jumps on the 50 Shades of Bad Jokes bandwagon. 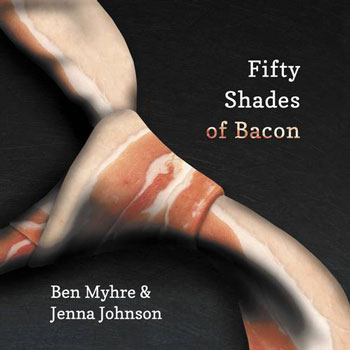 Try these at your own peril; the Amazon reviews about it are horrendous.

Clothe your iPhone in style! For $39.95 this bacon case can be yours! 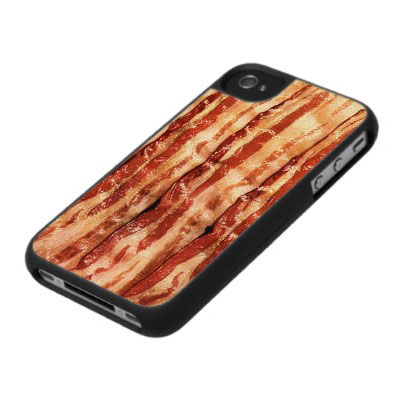 Seriously? This actually exists?!? You can get it on BaconLube.com (obviously) for $11.99.

Bacon Of The Month Club

The ultimate bacon gift: the Bacon of The Month Club. Each month two pounds (= 0.907185 kg) of different kinds of bacon will be delivered at your doorstep. Awesome. They do a lot of flavours, like Cajun, Apple Cinnamon, Jalapeno, Honey BBQ, Maple, Brown Sugar, Vanilla Bourbon, Sun Dried Tomato, Pepper, and Hickory Smoked. 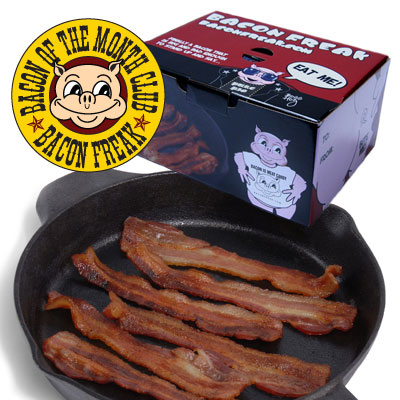 So bacon lovers would any of you be actually happy getting any of these bacon gifts for Christmas? Or is it just too much bacon?

One of the other sessions I held at BarCamp Berkshire last weekend was “Intro to Cooking”. This quickly turned more into a “share your cool recipes and kitchen tips”, and I learnt some great things! One of the recipes I talked about was Spaghetti Tequila which I made last week after experimenting with some ingredients. If only I lived in New York! I came across this New York bakery called Ruby et Violette and they do these amazing sounding cookies and brownies. They’ve currently got 40 flavours to choose from, but they change their favours throughout the year doing over 100 different flavours! And those flavours sound AWESOME.

The best thing is that they’ve got boozy cookies. My favourites (as much as I can have a favourite without actually having tasted them) are the Black Russian and Champagne Strawberry. Kahlua in cookies? Why have I never attempted this before? The other boozy flavours are Creme De Menthe, Mimosa, Pina Colada and Rum Raisin.

Stuck on You – Butterscotch, caramel, marshmallows and chocolate. Nuf said?

The Breakup… His Story – This is the answer to any bad day. Oatmeal, peanut butter, caramel, dark chocolate and smoked salt. The result: Breakup?…What Breakup?

The Breakup… Her Story – Each side of a breakup has similarities – in this case, oatmeal, peanut butter and caramel – but it’s the subtle differences that really matter. Her Story has the sweeter twist of maple syrup and white chocolate topped with maple sugar crystals.

Exotic Seduction – Who would have thought curry and chocolate would marry well? Luckily – we did, because this is unbelievable. 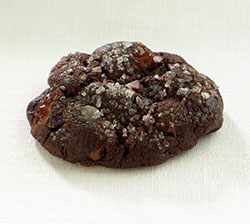 Don’t they sound amazing? I need to go to New York now to try these cookies! They ship to anywhere in the US, but they also have a cafe in NY (which also sells ice cream and more). There’s a cool contest going on, run by Chris Cardinal and Threadless.com. The idea is to turn one of the Threadless T-shirt designs into a cake! To check out all the rules etc head on over to Threadcakes.com.

Here are a couple of amazing cakes some people have created: 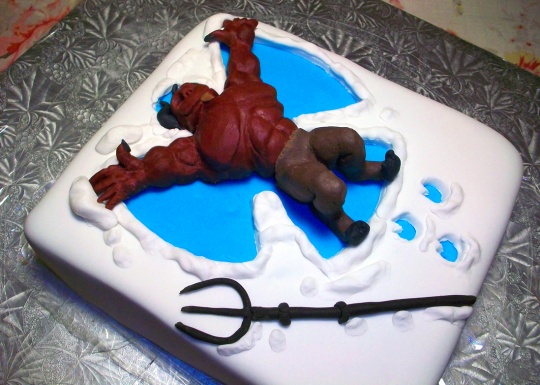 Compare with the original design of “I Wish I Were” 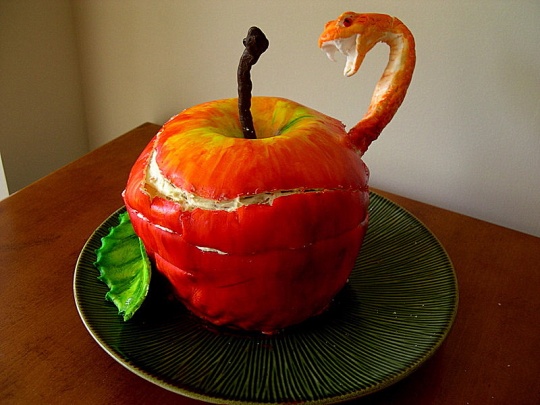 Compare with the original design “The Apple” 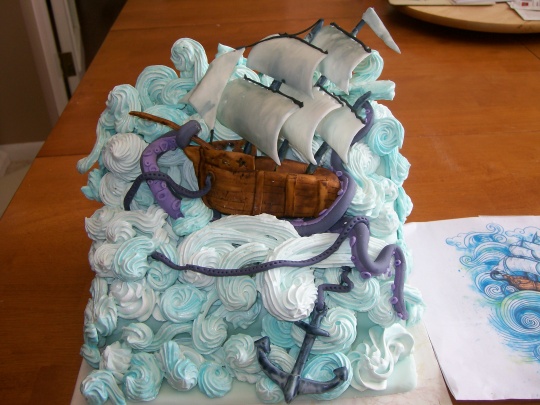 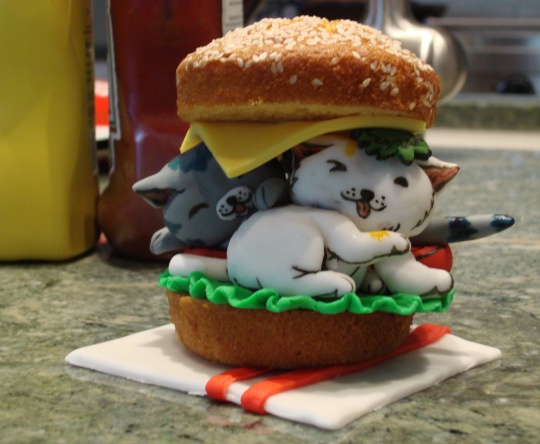 Compare with the original design “Catburger” 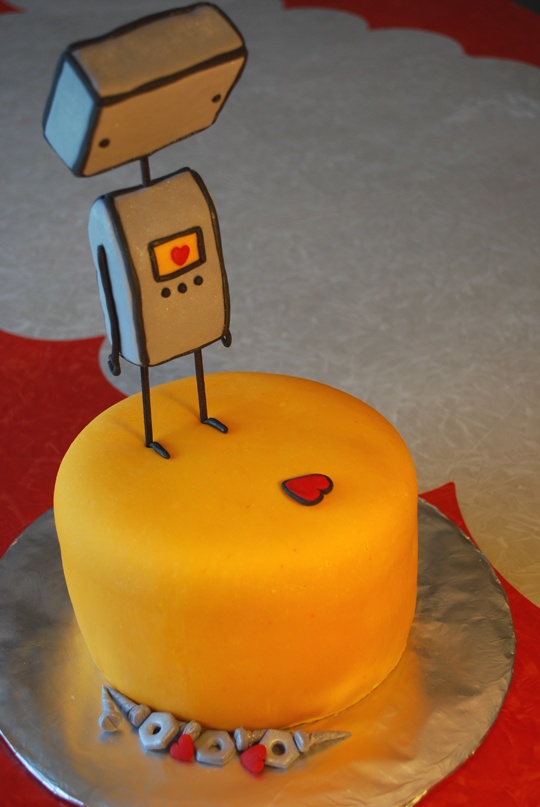 Compare with the original design “She Doesn’t Even Realize” 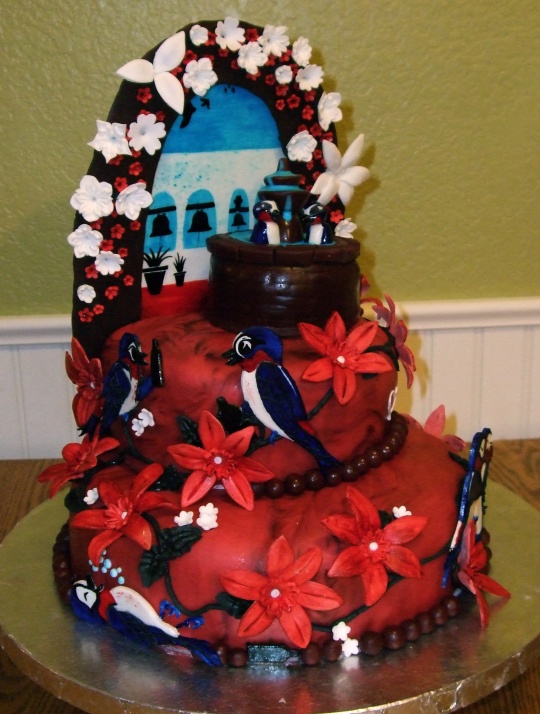 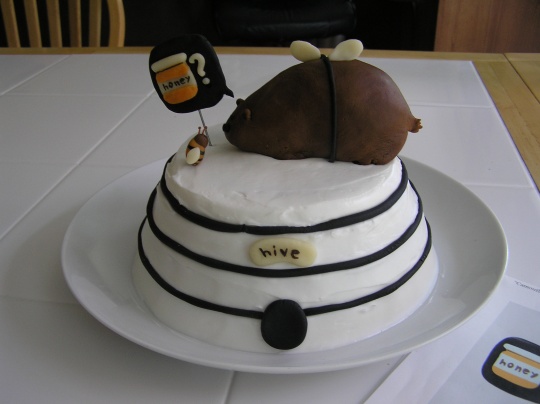 Compare with the original design “Camouflage”

There are loads more in the Threadcakes Gallery, but these were the best ones so far (in my humble opinion). The contest is open till August 3rd, so expect some more amazing cakes in the following weeks.

As some of my Twitter followers may have noticed yesterday I wanted to do something crcreative with butternut squash. I got a lot of replies back suggesting curries, but I settled on something (in my eyes) simpler: gnocchi.

I didn’t make the gnocchi itself from scratch, but everything else (= the sauce) I pretty much did. Here’s how it turned out: For those of you who might want to recreate this dish, here’s the recipe:

First I put the butternut squash for half an hour in the oven (in a buttered oven dish). The gnocchi you just have to prepare as it says on the package (2-3 minutes in boiling water). Then it’s basically just throwing the mushrooms, parma ham and butternut squash together in a pan. After a couple of minutes, add the creme fraiche, the spices and some water, and Tada! That’s it!

I was in a bad mood yesterday, so Cristiano decided to cheer me up with cocktails: We took the recipe for the Miss Geeky Moscow Mules and left out anything we didn’t had. We also didn’t have any crushed ice though and no blender, so I had to resort to smashing big ice cubes wrapped up in a towel with one of my high heels. Not the most elegant solution, but highly effective.

So here’s the recipe:

I’m a sucker for Ben & Jerry’s. I like ice cream, but I love love love Ben & Jerry’s. My favourites are Cookie Dough, Chocolate Fudge Brownie and Half Baked (a mix of the previous two). But then I came across a list of the retired flavours… Oh My God! Some of these combinations just sound so perfect!

Here are a couple of the retired ice creams:

Don’t they sound scrumptious? These are only a small selection of all the retired flavours; the list just goes on and on. I hope they’ll bring some of these back out of retirement, cause I’d love to try them. Now I’ve got a craving for ice cream again!